Thinking of You…or Why I Hate the Itsy Bitsy Spider

We wouldn’t be talking like this, you and I, if it wasn’t for her. You know her. We all have a version of her. And when she’s gone, we can’t replace her, and you’re aware of this, so maybe you sympathize and you tell me it’s all right. But you know it isn’t. I know it isn’t. So we cut a deal. We stop talking about it. But this is what we do when we want something to go away. We stop mentioning it and eventually it doesn’t hurt so much. But it never goes away. And honestly, I never want it to go away.

I was waiting for a delayed airplane. I don’t remember the airline or the flight number. I just remember being upset that I wouldn’t be on time and that it was going to be too late at night to visit my grandma. The plane came eventually, as planes do, and on the flight a lady sang “Itsy Bitsy Spider” for a free drink. Or maybe it was a man. But when I got off my plane in Ft. Lauderdale airport, all I could remember was my dad telling me he’d been holding in the news: my grandma died before I ever left Orlando. My dad and I cried in front of flight attendants and airport employees on the floor of that airport. I don’t know how he held it in. I held nothing.

Now it is approaching almost half a decade later, and I am here in Boston, remembering my grandma, Elayne. Happy Birthday, Grandma. I miss you. So much it hurts.

My grandma was a media specialist at Hallandale High School and introduced me to books when I was very little. She read to me before bedtime (I had lived with her through most of my youth) after watching Jeopardy and playing solitaire. I’d rummage through her fake jewelery and cover my arms in large-beaded bracelets and gems and wood-carved cuffs. I’d set the table and stick little neon pirate swords into cut fruit because she asked and when we made French toast, I’d crack the eggs and she would dig the dropped shell pieces (because I always dropped them) out of the bowl. When I wrote poetry, she praised me. She pushed me to enter contests and join chorus. She went to my plays and my recitals. She bought me dance shoes and leotards and thousand-piece jigsaw puzzles and my first pair of glasses. When we visited my aunt in Maryland, we’d walk the streets of D.C. and enter museums both large and small, miniature aquariums and monuments and buildings that reeked of power. On road trips, she would bring my pink blanket and count the signs with me to South of the Border. At dinner, we named the states. I always forgot at least five. In Vermont, she raved of the beauty of the trees in fall, and how someday I’d get to see them.

She was right. I saw the leaves change in Boston and they were beautiful.

The pictures below are of my grandma and me. I had to take a photo of a photo, but I wanted you to see the woman responsible for the person I’ve become. 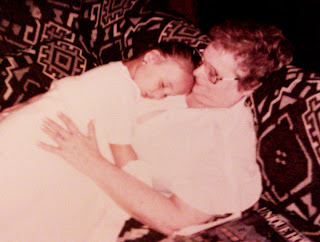 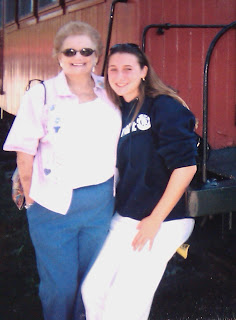 It is also important to note that today is my brother Jeffrey’s birthday. He’s getting so darn old, but I thought I’d provide a picture of when we were tiny. 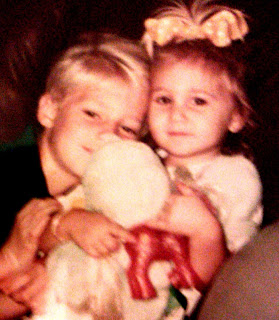 Happy Birthday to You.