Since my first set of childhood photos went over so well, I’ve decided to use another photo from the batch as a source of poetic inspiration. I’ve also included an on-the-spot poem about the tornado that hit Massachusetts today. I was driving home watching the lightning—scared me a quarter to death. That the sky can open up like that, so angry and bright, proves that nature, in any fight, will kick our asses (excuse the language). 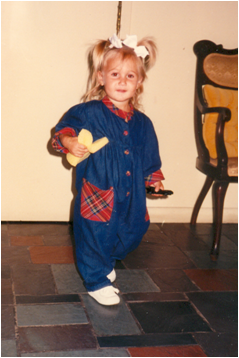 An on-the-spot poem inspired by the above photo

I’m really not sure
what you were thinking
when you bought
this outfit.

Love,
the little girl
with cornflower pigtails
that darkened
when she hit middle school;
too dark so that she stopped
looking like her mother;
dark enough to make
her dye it,
to feel
just close enough
to the past,
to snapsuits and rompers,
to you.

An on-the-spot poem on lightning-laden skies

I do not like horizontal lightning
that snaps across pink skies
better than Disney fireworks.

I do not like lightning,
or pink skies,
or fireworks.

(I experimented with this poem. Just ignore it if you hate it.)