I started reading A Heartbreaking Work of Staggering Genius by Dave Eggers just a few days after the Fourth of July. I read most of it on the T, often on the way to Kendall and later home from downtown Boston. It was taking forever, but I knew I just didn’t have the time to read at home. This is when I realized I spend, on average, about seven hours a week riding Boston’s transit system. Seven. Thirty minutes each way. Sometimes more. So I spend about fifteen minutes reading a few pages of Eggers, then go back to people-watching and feeling slightly squished in my seat. A sardine. The peanut butter and the jelly. 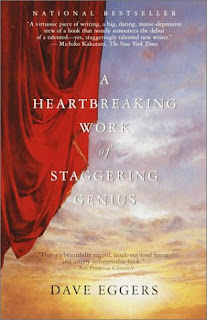 But about the book.

A Heartbreaking Work is Egger’s life in an awkwardly comedic sort of nutshell. He deals with the death of his parents, becomes the guardian of his younger brother, Toph, tries out for The Real World, starts a magazine, comforts overly dramatic friends, experiences severe paranoia. People die. People fall off decks. People run naked on a beach.

It takes a little while to get used to Egger’s voice, to follow his digressions, his constant jumps in thought and time period, but the writing, the phrasing, the personality is amazingly solid. He is completely self-aware, hilarious, honest, and emotional. He makes his life both comedic and tragic, shifting between loathing and pride, and the unique sense of confusion that accompanies the experience of becoming an adult much too early. It is not just heartbreaking, but impressive. You should probably read it; I mean, it is a work of genius and all.

1 thought on “It’s Heartbreaking, I Know”