Posted-onMay 5, 2010February 13, 2012By lineBylineLex Luther
In class I have a tendency to doodle, but tonight was a little different. I took phrases and bits of what my teacher said, of what classmates said, and morphed them into the poem below. 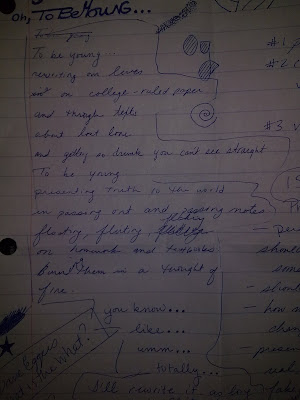 To Be Young, an in-class poem
by Alexa L., who most definitely pays attention in class.
To be young
rewriting our lives
on college-ruled paper
and through texts
about lost love
and getting so drunk you can’t see straight.
To be young
presenting truth to the world
in passing out and passing notes
floating, flirting, flaking
on homework and textbooks,
burning them in a thought of fire
you know…
like…
umm…
totally…
I’ll rewrite it as long as it gets me an A.
What more can I say? I was, you know…like…inspired or something.
And just for nostalgia’s sake, a short poem from February 2, 2004 from a document I titled Flowers (I was 16).
Blushing in her modesty
She turns her head to sigh
And rosy cheeks do blossom such
That clouds bend down to cry
Like, yea, ttyl.
Pass it on...