Written on the back of an edition of TimeOut London, on my way to Holland:

“The sky stays so still, as if the world—for but a moment—has hit pause while my life plays on in my bus seat.”

I don’t remember the bus ride to Amsterdam, possibly the result of bus-dozing (but who really knows?); so I arrived in the city with a swiftness only matched by the quickness applied to grabbing my bag to get a good seat on the bus (what I’d later affectionately call a battle).

In Amsterdam, we (my tour group) stayed in a hostel; our first and only hostel on the trip. I, still sick, decided to nap, waking to my pants sticking to my legs like hair gel, and my shirt sticking to my bra as if permanently attached. Dare I say it was hot? I dare, and so my room slept in near-skivvies. But despite the heat, I truly liked Amsterdam. I spent one of the nights in a restaurant, eating croquettes while I wrote postcards, drinking wine and basking in the glory of being alone. Other days I went shopping, ate pastries, lay in a field with the view below. 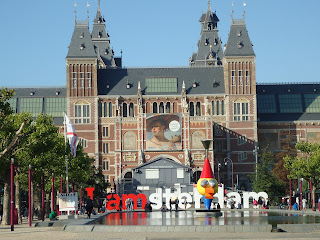 And yes, I went to the red light district. I recall being terrified, both at the slimness of the alleyways and the nonchalance of the lingerie-clad girls, either pointing their fingers with a crooked come hither or chatting on their cell phones, all behind glass windows, the street aglow in red and darker shades.

On the way to Paris we stopped in Belgium. We visited the Atomium, a giant science-related monument built for the 1958 World’s Fair, and then the part of Brussels home to the Manneken Pis, a small fountain sculpture of a boy peeing (we were lucky enough to see him clothed). I ate the real deal Belgian waffle (cue jealousy via photo) and ruined chocolate for the rest of my life by eating Belgian truffles.

I want to be as brief as I can about my stay in Paris (we were there 4 nights so we did a ton).

Paris terrified me with its hateful taxi men, but once the first night was over—the escargot, infidelity, and bad attitudes digested—Paris made up for its rudeness and swept me off my feet, most literally, as I ascended the height of the Eiffel Tower to its summit and later watched it sparkle, walked the sculpture-laden halls of the Musée d’Orsay, found myself, wide-eyed, under the Arc de Triomphe du Carrousel to view the Arc de Triomphe de l’Etoile in the distance, and ate cheese and bread along the Seine. Notre Dame. Confessions of love in the form of locks. Ladies dancing, breasts exposed (we went to a cabaret close to The Moulin Rouge). A cruise under the Parisian sky. And of course, Versailles, with its size and beauty and gardens I had thought could only be in movies about young girls and talking rabbits and grinning cats and top-hatted fellows who drink much too much tea. I loved Paris, though I couldn’t say it then. I really, really did.

On the way to Switzerland, I wrote this on a piece of paper; more specifically, my list of addresses and approved banks:

“I wanted to travel the world with you—your blue eyes lit like bits of sky, your German unpracticed, stumbling over itself while we ask for Kinder eggs.”

Though we were in Lucerne for only a day, and while most of the group went to Mount Pilatus, the five of us who stayed behind went paddle-boating, some jumping into the cool of the water (I wasn’t prepared for such a feat, or for the soon-to-be sunburn). I would have loved to swim among the swans. Instead, my enjoyment lay in the fruits I tasted from a local market, sitting with Mallory and throwing some of the smaller berries into the water to watch the ducks snatch at them. I bought knives (because this seems necessary in Switzerland). I watched students sketch. I collected spoons. My only complaint: the cost of pretty much everything. 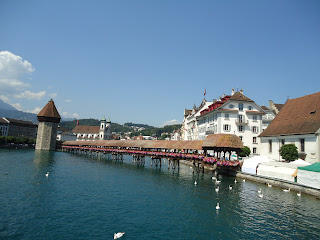 An on-the-spot poem about the Eiffel Tower:

You touch the sky
better than I ever could.

So please,
if you have a chance
to say hello,
or to reach close enough
to pluck at clouds,
please,
tell them I miss them.

Tell them,
I touched the sky, too.

Tell them,
I reached
for maybe a second
and felt their smiles
like sunshine
on my cheeks.

Tell them,
I felt less nervous then,
less scared.

Tell them,
I love them.