I used to collect snow domes—incorrect terminology, maybe, because I’ve heard them called snow globes, too—but I collected the glass and plastic domes, a reminder of every road trip up the east coast, every vacation taken, every birthday, every Chanukah, every everything. Some shattered. Some collected bits of dust among the fake bits of snow; so I threw them away, glass shards scattered on the back of my father’s black car signifying the death of a home. When my grandmother passed away, I stopped collecting them.

My grandma collected elephants with their trunks up. In undergraduate, I wrote about her often, and once suggested that the trunks made elongated salutes toward Heaven. I talked about her collection, the elephants made of glass and porcelain. And when I moved to Boston, pieces were lost, elephants broken. They sit on a shelf, some one-eared, some with missing tusks. And I wonder: What is the point of collecting? Does it bring the collector closer to something? The fact is my grandma’s gone, her hundreds of elephants strewn across the country, given to family members and placed in cabinets to collect dust. We are missing the tales of acquisition, the history gone with every distributed or discarded pachyderm.

I collected snow domes at first because I thought they were beautiful. I received my first one before I ever saw snow, pushed the turnkey ‘til carousel music played, and shook. I considered it my first winter. I was a collector then, like my grandma. We shared this in common, and I never realized that until now. Maybe the difference is in the organization. My grandma was hyper-organized, her life in files and memo books. I have her lists of gifts received at weddings, birthdates, caterer schedules, expenditures, brunch guests, and catering receipts. Her college courses at Brooklyn College, Barry College, and Florida Atlantic University. I have her grades. She was normal. On occasion, she even got a C. I have her school records, teaching records, a wedding guest list from 1948.

And in one of the miniature binders I found a poem to my dad (whom she adopted): 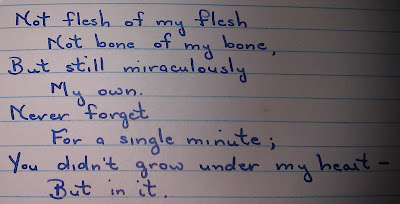 Not flesh of my flesh
Not bone of my bone,
But still miraculously
My own
Never forget
For a single minute;
You didn’t grow under my heart—
But in it.

She wrote the poem out in her practiced, even lettering; each blue stroke so careful. And these lists and these elephants and these snow domes—the more I throw away the less I have left of her.

I’d rather stay a collector.

An on-the-spot poem about my grandma’s miniature binders
written October 28, 2010, in about ten minutes

Grandma,
you got a C in abnormal psychology
in 1949,
spelled lasagna
with a z,
and kept a list
of every greeting card you mailed
from ’59 to ’82.

Grandma,
I never took abnormal psych.
I spell lasagna
with an s.
And I don’t send greeting cards,
just e-mails
or texts.

But if I knew the address
to Heaven, Grandma,
I promise
I’d make
an exception.