book, funny, punctuate.with.a.kiss, reading
“I had spent years refinishing…I always vowed I’d never do it again, but that’s the problem with having a skill: once you swear it off, you know you’re stuck with it forever.”
from something for everyone

A particular Boston Goodwill is home to a miniature book section, disorganized and possessing the faint smell of mildew and old. The cheaper books cost a dollar; the most expensive, about three bucks. It is in this particular store where I rummaged through a basket and found David Sedaris’ Naked, surrounded by books browned and almost new. I had heard a few things about the author: You just have to read his stuff, Alexa, you’ll love it. He’s hilarious, a real hoot. So this was my plan. And hey, it was only a dollar, so if I didn’t like the guy, I could just donate him back to his place in the basket. 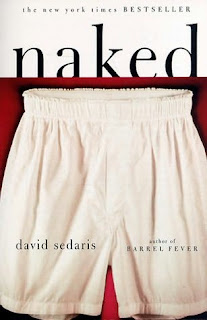 As it turns out, the few things I’d heard were true.
In my Book Publishing Overview, we discussed the saleability of short story and essay collections as if they would consistently be flops. Along with most of his essay collections, however, Naked became a New York Times bestseller (which is displayed proudly on the cover of my copy). Honestly, the book deserves the recognition. The worst part about this book is the fact that it makes my life sound amazingly dull (though I could probably say this about most memoirs; you wouldn’t write about your life unless you had a real whopper of a story to tell). And Sedaris is funny. He’s a gas. He details his adventures with such vivid nonchalance. It’s like reading a situational comedy, but with the occasional prostitute (as in “dinah, the christmas whore”); and Sedaris can’t help but end up in some of the most unbelievable situations. He hitchhikes across the country, picks the leaves off apples (which eventually leads to Curly and his room of many, well, I don’t want to ruin it for you), visits a nudist trailer park in his title story “naked”, and even relates his short bout as a Shakespeare over-enthusiast in “the drama bug.” He shakes his head violently. He tells people he’s a medical student or an actor. He sleeps under bus seats and paints his hair with black shoe polish. Sedaris is able to capture the hilarity, the sadness, and the hopefulness of his life in each tale, and does so with a flare all his own (and a few exclamation marks).

By the way, if you couldn’t tell, I’m recommending it.

This is the situation.