Fairy Kisses and Nonsense…or My Attempt at Writing for Children 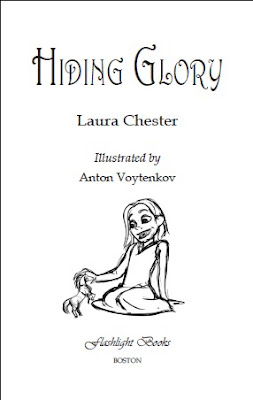 In Book Publishing Overview, we had to follow the creation of a book from initial manuscript to its publication. We created our own press, designed our covers and our text pages, and figured out the print run and distribution plans. I received a manuscript for a children’s book (my sample title page is on the left) and after reading the manuscript—this was several months ago—I thought I could try writing my own book for the little ones.  I only wrote a few pages, but I will be posting them in parts every now and then. If I get positive feedback, then I might actually try to finish the darn thing eventually. But for now, here is a brief segment of my first attempt.
Once Upon a Raindrop, Part I
It was on this type of day it always happened, always expected and not expected. I would prepare myself for months, then the memory of what I was supposed to do would pass; and then there would be rain, and for a second I would feel like there was something I should remember.
When I was two, a fairy pinched me. Her two beady eyes looked angry, as if she were jealous of my stuffed rattle-worm with the missing eye button or my China doll with the tattered dress. The fairy’s clothes were too pretty: she wore a body suit that looked to be sown with glitter. When she moved, light would glint off her outfit, then off her wings, and she would circle around my head then pinch and pinch and pinch. I hated her then; she always watched me through my window. When I slept, I knew she was there, wishing she could wake me.
When I was five, the fairy bit me and I slapped her to the floor. How I wanted to squish her then, but I was too kind. The fairy limped to the window and flew upward toward the stars.
For years I did not see the fairy. I was six, seven, eight, nine, ten, eleven, and twelve before she found me again. I was pulling brown strands of hair from my comb when I felt a tap on my shoulder.
A whisper made me still. “You have something of mine.”
I turned and smacked at the air with my comb and a faint “oh” faded into the air like dust. When I looked down, I saw her; she swatted in front of her nose.
“What was that for?”
I stared at her, wide-eyed. “It’s you!”
“Yea, Now you understand—”
“Understand? What’s there to understand? You tried to bite me again!”
The fairy shook her head and laughed. “No. Now you understand me. The way I talk.” She made a motion with her hand to look like a mouth. “You know, because you used to have trouble listening, what with you being so little.”
I bent down and put my hand next to her. I promised to pick her up if she promised not to bite. The fairy agreed and she walked upon my palm. Her little feet felt heavy, despite her size and she twirled once, shaking off some of the lint from the carpet.
“I see you haven’t gotten any cleaner,” she said, picking bits from her hair.
I held my breath and placed her on my dresser.
“So what do I have that you want so badly? What can I do so that you’ll leave me be?”
“Future.” Her voice shook and repeated the word.
I, twelve-year-old Maggie Faye, did not have the fairy’s future. She’d been following me for seven years on a silly notion.
“Did you hear me?”
I nodded, grinning wildly. “I think you’re mistaken. I have nothing of yours. I don’t even know what my future is. How do you know I have yours?”
“Look. I know you do so just give it back.” She pumped her fist as if to hit me and hopped up.
“You should go. You’re not getting help from me.”
She stomped her foot down, but it didn’t sound like a stomp at all. “I’m not leaving ‘til I get my future back.”
I plucked the fairy up by her wings and flung her glittering body out the window.
Pass it on…